Several major improvements were made in the latest Nvidia Pascal graphics family. The smaller nm design reduced the TDP (thermal design power) significantly. As a result Nvidia were able to optimise their manufacturing process, by combining mobile and desktop platforms into a single design. The same GPUs are used in both Mobile products like laptops (MXM modules) and high-end desktop systems (PCIeX16 cards) .

This was exciting news, many news articles were published reporting that performance would be the same for both mobile and desktop formats. However the journalists overlooked the impact of the down-clocking required to develop a reliable solution within the confined space of a mobile product.

How do the Nvidia Pascal base specifications compare?

On paper, there is little to chose between the specs. The 20% reduction in power consumption is the most notable variation between mobile and desktop products. The TDP is dependant on implementation, so this is really a red herring. In theory with sufficient cooling the manufacturer is able to clock the GPU to the same speed as the desktop variant. This achieves similar performance, which explains why techpowerup.com report the desktop variant with less performance than the mobile counterpart.

How does true performance of mobile and desktop GPUs compare?

The average buyer is unlikely to identify the drop in their hardware’s performance. After all, few consumers carry out and compare benchmark scores. In my opinion many consumers are being short changed. The GTX-1070 sells for 30% less than the GTX-1080, yet mobile GTX-1080 devices perform closer to the GTX-1070 spec.

Why is there such a performance difference in the same Nvidia GPU core?

How the manufacturer configures the card has a huge impact on the performance gap. There’s few technical limitations which prevent the mobile GPU being clocked to match the speed of the desktop counterpart. But with the comparatively huge heatsink and fan assemblies allowing the average desktop card to be configured >10% over base frequencies, it begins to explain why we see such a significant performance gap.

The GPU selection process during manufacturing could have an impact in the performance gap. Understandably the professional cards get first dibs on the best performing GPUs. The Quadro and Tesla products carry a price tag as many as 10 times higher than the commercial counterpart. As a result these professional cards see a 20-30% performance increase, despite the clock speeds being sparingly applied. If the mobile are lower in the selection process than desktop it would help to explain performance drop further.

Notebooks are not the only devices using Nvidia mobile GPUs!

Powerful small form-factor gaming PC’s are flooding the market. comprehensive ranges of small form factor computers are being manufactured by Zotac, MSI, ASUS, Alienware and Syber. The computers are aimed at the growing number of gamers that want to play from the comfort of their living room. The first entrants used desktop cards within the design. However the drive to have the smallest most compact design has led to the use of mobile GPUs.

Steam have helped the small form factor gaming pc market grow. Their ‘Steam Machines’ initiative has helped develop the demand. The new form-factors has also sparked the interest of industry. Industry sectors such as hospitality and simulation are using solutions based on the technology to reduce size, weight and cost in various applications. I am currently working on such a project, which is why I have developed an understanding of the solutions and the market.

What’s inside a Steam Machine?

There are many manufacturers of small form-factor gaming computers, each of them have different designs which use a whole range of processors and GPUs. The smaller mobile based solutions are using small form factor boards similar to the Mini-STX footprint. Most of these boards are bespoke to the product. One notable board is the ASRock H110-STX MXM, it will allow system integrators to build small form factor units.

I toredown a Zotac Magnus EN1060, one of the smallest high-end gaming computers available. To my surprise I found a MXM GFX card installed. I had reviewed the specs on multiple occasions and saw no indication that it was equipped with a mobile GPU. In fact the Zotac specifications page doesn’t include details of the GPU or memory clock speeds, so it is difficult to tell what performance level to expect! A worrying development! Particularly when there is little to no benchmark data available (especially in comparison to desktop equivalent setups). 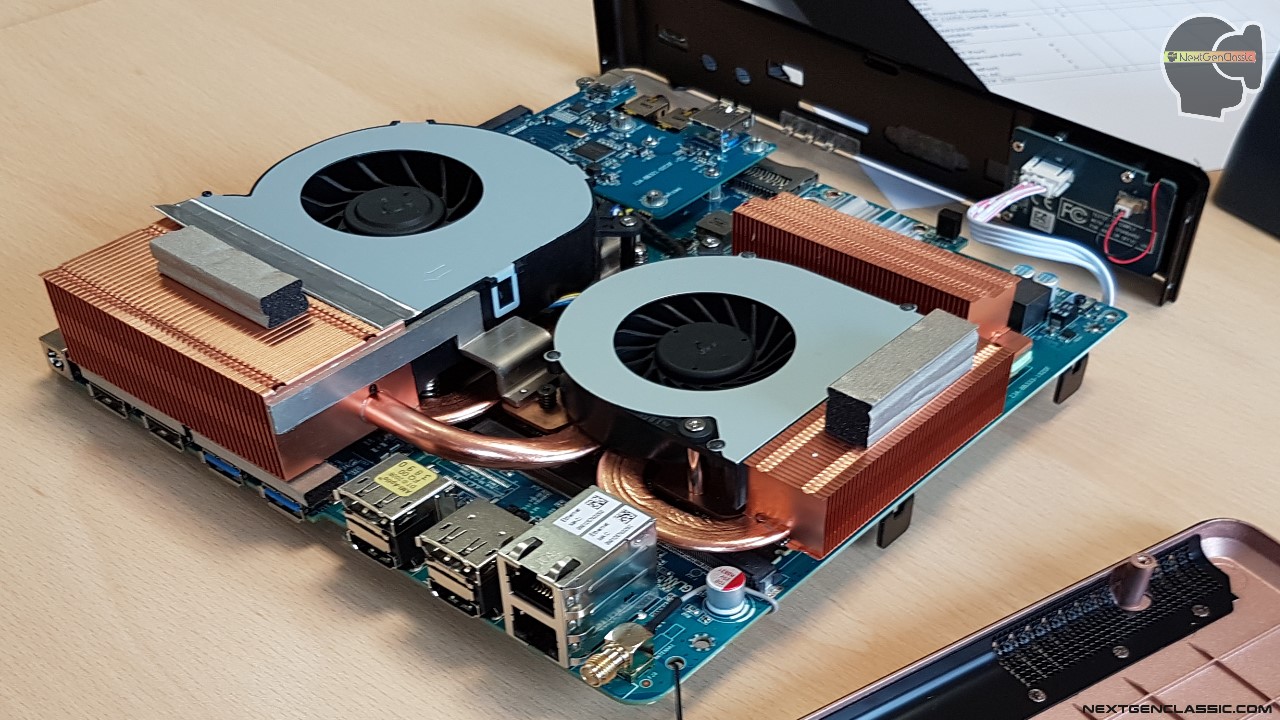 To give Zotac credit, the design is well constructed. The use of an MXM module allows higher volume manufacturing of the motherboard. Reducing  cost by consolidating the design across the series. The design is very compact and runs very quietly. If I had one complaint, it would be that the unit runs quite warm. The unit intakes air from all sides including the two where it exhausts, this results in warm air circulating which will not help performance.

Was the mobile GPU configuration in Zotac unit compromising performance?

Despite Nvidia’s Pascal using the same GPU for mobile and desktop products, consumers should expect a 25% performance gap. It is concerning that a mixture of both mobile and desktop solutions are being advertised as the same product. Buyers must tread carefully to avoid disappointment and not buy based on the ‘GTX-10XX’ model number alone.

Nvidia have presented manufacturers an opportunity to up-sale mobile designs as full fat desktop products. Ultimately this will create disappointment with the consumer and lead to damaging consumer trust and brand reputation. System manufacturers may lose sales once consumers understand the performance sacrifice that is being hidden from them.